Second edition of ‘M is for Data Monkey’ is delayed 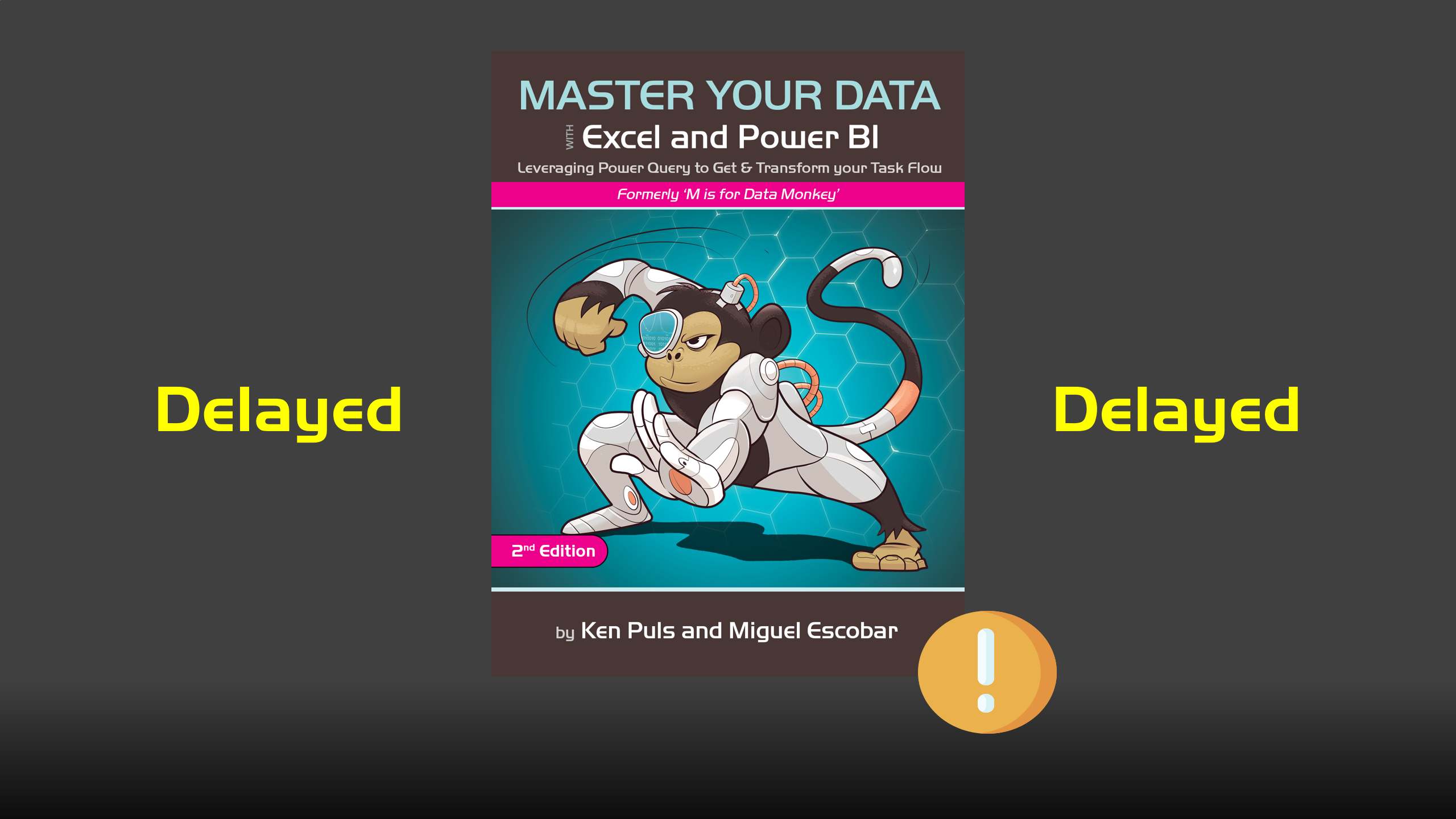 In 2015 Ken Puls and I (Miguel Escobar) published a book under the name ‘M is for Data Monkey’. We were (and still are!) very proud of the work that we were able to put out. We never expected our book to become the #1 book out there when it comes down to Power Query – we are very grateful, and we thank everyone who has supported us throughout the years.

One thing was very clear from the moment that we published that book and is that Power Query is an ever-evolving tool that just keeps getting better and better every year. This meant that at one point we would need to update our book.

In 2017 we decided to start that journey of creating a 2nd edition for our book. I worked with a designer to see the cover image that you see in places like Amazon as well as the colors being used in that image and then Ken and I worked on creating a table of contents for the new book as well as set up the groundwork for how we were going to create new content in parallel to our main project back then: the PowerQuery.Training.

Throughout the years 2018 and 2019, we weren’t able to fully commit to creating the content for the book due things like authors-block, research / investigation efforts to come up with totally new content, and the biggest fear of creating some new content that would be obsolete the day that the book was released due to a new update on Power Query – this last one being the hardest and most nerve-wracking reality when creating any books that have content on Power Query.

Las year Ken and I fought over our fears and simply reached the conclusion that we were going to simply put out our best effort in the book in hopes that the content doesn’t become obsolete the day that it gets released which was going to be at the end of the year 2020.

However, 2020 had different plans for both of us. COVID-19 hits both of us differently since we’re in different countries, but it has definitely affected all of us. It puts us in a pretty challenging situation where we had to figure out how to maintain our businesses running and to mitigate any unnecessary operational costs as well as to figure out if any projects that we were running internally would be deemed a complete loss.

2020 for me was going to be the year where I was going to start ramping up my business – Powered Solutions. The first quarter of the year I started to look for new members to join my team, but due to the quarantine guidelines here in Panama, it puts my efforts into a hold for a few months until I was able to resume that effort later down the year. It wasn’t until September of this year that I was able to sign the new employee, and during that time I’ve been working shifts of around 10-16 hours quite frequently trying to make sure that I’m able to sustain these challenging times.

COVID-19 has hit my country quite hard. At the time of writing this post, there’s been over 111K confirmed cases in my country. We only have 4M habitants. In contrast, Canada has around 150K cases with a total population of 38M. You can only begin to imagine how serious the measures have been where I’m at and how restrictive it has been to even go out of my house for a maximum of 4 hours a week for quite a few months. (yes, only a total 4 hours on a weekly basis to try and do all that you need to do)

Since March, Ken and I have been battling to make sure that our businesses keep running. Online business are now more competitive than ever, so we were able to convince Matt to join our PowerQuery.Training which has now been rebranded to being Skillwave and we’re aiming for bigger things now – we’re still in that transition process and working on an even better platform, which has taking us more and more time.

While I understand that this article is becoming quite extensive, I think that all of our supporters need to understand where we’re at and why we’ve reached the decision of pushing the release date once again, this time for the year 2021.

We will not cancel this release and we’re going to see it through the end.

Thank you for understanding and stay safe during these uncertain times.